The first cross-promotional effort between UFC and Strikeforce looks to have a date. 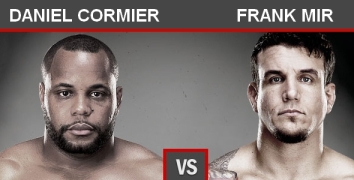 Mir recently did an interview with MMAFightCorner.com where he talked about the fight taking place on Nov. 4 in Oklahoma, a Sunday night. That would be unusual given Showtime has aired all of its major MMA shows for the past few years on Saturday night, and a Sunday night would be going head-to-head with what is usually the highest rated NFL game of the week.

The fight was first earmarked for Sept. 29 in Sacramento, Calif., but later moved off that date, likely because Strikeforce announced Gilbert Melendez vs. Pat Healy for the Strikeforce lightweight title for that show and felt Mir vs. Cormier should headline on its own.

This would be a first match of its kind with an existing UFC star facing an existing Strikeforce star. It was made due to unusual circumstances. UFC and Showtime reached an agreement when signing their most recent television deal late last year, where the Strikeforce heavyweight division would be moved over to UFC. In exchange, Showtime would get exclusivity on all contracted fighters in the other divisions as long as the two companies were working together.

However, when the deal was made, the Grand Prix tournament, which started in February 2011, had one fight left. Showtime negotiated for both the final to be on a Strikeforce show, where Cormier defeated Josh Barnett via decision, plus that the winner would have one more match on Showtime before moving to the UFC.

With Strikeforce having no heavyweights, Cormier would have had to have faced either a heavyweight from outside the UFC or a UFC fighter. Tim Sylvia at one point was approached, but Dana White and Lorenzo Fertitta made the decision to go with Mir, coming off a loss on May 26 in Las Vegas when challenging Junior Dos Santos for the UFC heavyweight title.

Mir noted that he expects to be booed, given that Cormier, who grew up in Louisiana and now lives in San Jose, Calif., went to Oklahoma State University. In 2001, Cormier placed second in the nation at 184 pounds to Cael Sanderson, one of the country’s all-time wrestling legends. Cormier is the best credentialed heavyweight wrestler on the Zuffa roster, with his career peaking in 2004 when he placed fourth in the Olympics. He was also the U.S. Olympic wrestling team captain in 2008, but couldn’t compete due to his kidneys shutting down while trying to cut weight.

Cormier, who is the favorite in the fight, will go into UFC as a heavyweight. However, if teammate Cain Velasquez wins the title from Junior Dos Santos in their scheduled Dec. 29 fight, Cormier has talked of the possibility of cutting to 205 and challenging Jon Jones, or whoever the light heavyweight champion is.

One thought on “Mir vs. Cormier Heavyweight Showdown to Take Place Nov. 3”