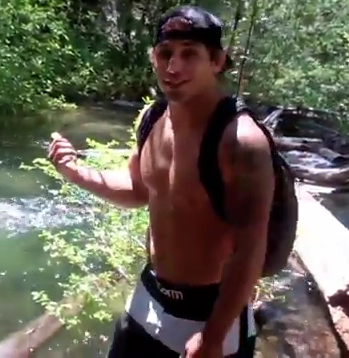 Earlier this we month we brought you the news that former UFC Featherweight contender Chad Mendes was being sought by police regarding his role in a bar fight. The local authorities were looking for the Hanford, California native because he fled pursuit after allegedly striking another patron of the Lacey Inn Bar. Mendes was out of the state at the time reports were released, but declared his innocence a few days later.
Now, the Hanford Sentinel reports that Chad Mendesis being charged with battery for the incident:

Authorities say mixed martial arts fighter Chad Mendes has been charged with battery for his alleged involvement in a bar fight last month. The Kings County District Attorney’s Office announced today that they would seek a battery charge against Mendes, which carries with it a possible $2,000 fine and up to six months in county jail.

Mendes will have his arraignment hearing on September 19.
In his last UFC appearance, the Featherweight quickly dispatched Cody Mckenzie with body punch at UFC 148. Mendes is 3-1 in the UFC (12-1), with his only career loss coming by first round knockout to champion Jose Aldo. “Money” does not currently have a fight scheduled.