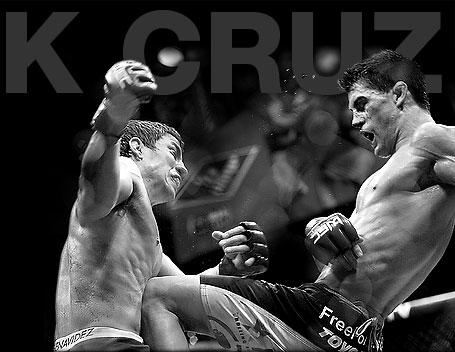 Ultimate Fighting Championship bantamweight titleholder Dominick Cruz has been sidelined with a torn anterior cruciate ligament, putting his anticipated rubber match against Urijah Faber on hold for the foreseeable future.

Cruz injured his knee while training in Las Vegas, where he has been filming the current season of The Ultimate Fighter: Live. Cruz and Faber have been serving as opposing coaches on the reality TV show, building up to a title match at UFC 148 on July 7.

The Cruz-Faber match was originally scheduled to headline UFC 148, but when a middleweight title bout between champion Anderson Silva and Chael Sonnen was shifted from UFC 147 in Brazil to UFC 148, the bantamweight title contest was moved to the co-main event slot.

Faber and Cruz have a long-standing feud that dates back to a 2007 match in World Extreme Cagefighting, when Faber won their first encounter. Cruz defeated Faber last July in the rematch, earning a unanimous decision at UFC 132 in one of the best matches of 2011.

There was no immediate word on a possible replacement for Cruz against Faber, or whether or not an interim title would be created. The likely candidates to take on Faber, should that be UFC’s direction, would be 21-year-old Michael MacDonald or Renan Barao.