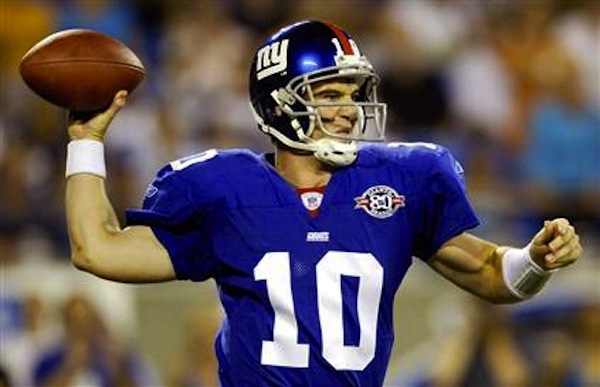 When I first met Eli Manning, it was the week before his brother Peyton played the Chicago Bears in the Super Bowl five years ago.  While everyone  was casual chic on South Beach, Eli walked around in a suit and tie. Yes, he looked dorky, but he was being himself.

Now that he has surpassed Peyton with two Super Bowl rings, Eli still comes across kinda dorky…but he’s still himself.  At the team’s big victory parade in Manhattan,  Eli’s Giant teammates hammed it up.  Eli still politely talked about a “team win.”   He’s no motivational speaker. He’s just himself.

In this era of athletes who are quick to promote themselves WITHOUT winning anything, Eli is a refreshing throwback. He’s the guy who won’t brag even when he can. It’s just not his nature.

What a contrast he is to the head coach of that other New York team. The Jets Rex Ryan talks big. Eli just PLAYS big.  Now that he has whipped the glam Tom Brady and gruffy Bill Belechik twice, Eli can walk on water in New York.

However, he’s no Tim Tebow, being interviewed again in a prime time special. He’s just Eli. Nondescript….but quite effective on the field, especially in crunch time.   The New York pressure cooker has not changed him. He has drowned out the noise, and stayed true to himself.

Maybe somewhere Eli does have a personality. I remember people thinking his big brother Peyton Manning was also kind of bland, until we started to see his wacky sense of humor.

With Eli..what you see might be what you get.  He may never be a GQ magazine cover boy. That’s OK.  There’s nothing wrong with just being a solid quarterback who lets his play do all of the talking.